Toronto Star: No Relief in Sight for Besieged Civilians in Aleppo 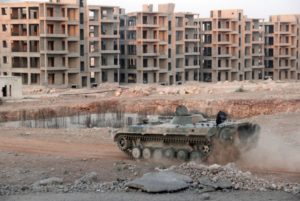 “As Russia announced daily three-hour halts to military action for delivery of aid to the northern Syrian city of Aleppo, there was little relief in sight for its besieged civilians.

Fighting between rebels and Russian-backed Syrian forces reportedly continued in parts of the city, and Amnesty International protested a suspected chlorine attack it said had killed at least four people and left some 60 others seeking medical care.

Meanwhile, the UN, as well as aid workers and people on the ground, said the proposed pauses in attacks would do little or nothing to help civilians survive one of the worst continuous assaults of the war.

Read the full article, with discussion from ID’s Reza Afshar on the consequences and motives of the Russian intervention, on the Toronto Star.