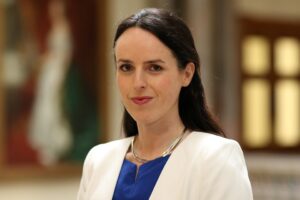 Photo courtesy of the UK Foreign, Commonwealth and Development Office.

Cat Evans joined ID in summer 2020 as the Director of European Operations and African Outreach, bringing extensive diplomatic experience gained from a UK government career specialising in conflict affected and fragile countries working on a range of political, security, development and humanitarian issues.

Before joining ID, Cat was the British Ambassador to Mali and Non-Resident Ambassador to Niger (2018-2020) where she oversaw the expansion of UK engagement in the Sahel and was a member of the International Mediation for the 2015 Algiers Peace Agreement. Prior to this she was the UK’s Deputy Head of Mission in Ethiopia (2015-17), where she was also responsible for co-ordinating government security activity in the region and UK policy for Somaliland. Her first posting was also in Africa, where she worked on security sector reform as an Adviser in the Sierra Leone Ministry of Defence (2006-07). In 2008-09, Cat deployed to Basra as a Policy Adviser to UK military leaders commanding British forces in south-east Iraq, covering a surge in operations up until UK withdrawal.

Cat began her government career working on Afghanistan (2003-04) and in 2009 was posted to Pakistan as First Secretary covering Afghanistan-Pakistan relations and the tribal border areas of Pakistan, including understanding Taliban dynamics. In 2011, she joined the British Embassy Kabul to lead the political section, with a personal focus on regional dynamics and reconciliation initiatives. Back in the UK, Cat worked on counter-terrorism for the 2012 Olympics and led a two year cross-Government review to examine the impact of the UK’s EU membership (2012-14). She has also led various crisis management responses in the field, including the evacuation of UK nationals from Libya.