Independent Diplomat (ID) began advising the Republic of the Marshall Islands on their climate diplomacy strategy in 2009 in the lead-up to the Copenhagen Climate Conference. A low-lying atoll nation, the Marshall Islands is one of the countries most vulnerable to climate change and already suffering its devastating impacts.

While the Marshall Islands and other Small Island Developing States stand to lose the most from climate change, they often lack the capacity, negotiating expertise and geopolitical leverage necessary to influence international climate politics, including the complex and technical multilateral negotiations under the UN Framework Convention on Climate Change (UNFCCC).

By offering strategic advice and providing legal and media expertise, ID helps the Marshall Islands overcome the significant disadvantage it faces relative to its larger and wealthier counterparts, who include the world’s major emitters of greenhouse gases. In doing so ID helps the Marshall Islands lead the diplomatic fight for greater ambition from all countries and so maximize its chances for long term survival.

Since the adoption of the historic Paris Agreement in December 2015, ID’s work has grown considerably to now also include support for the Marshall Islands’ role in convening the “High Ambition Coalition” – a regular Ministerial gathering of progressive countries that continues to lead the drive for greater ambition, including across a number of different climate-related fora beyond the UNFCCC. 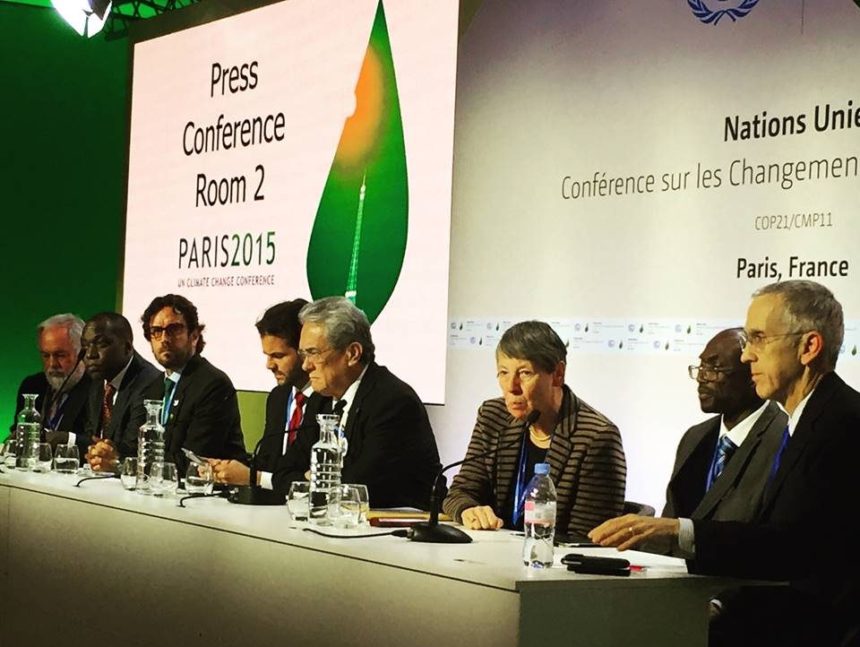 The Marshall Islands’ then-Foreign Minister, Tony de Brum, chairs a press conference of the High Ambition Coalition during the Paris Climate Conference. He is joined by counterparts from the European Union, Angola, Mexico, Germany, The Gambia, and the United States. Credit: Independent Diplomat.

With ID’s support, the Marshall Islands has emerged in recent years as the leading vulnerable voice in the fight against climate change, playing a critical role in securing the historic Paris Agreement in December 2015.

By forming a “High Ambition Coalition” during those negotiations, the Marshall Islands led more than 100 other progressive countries in their fight to secure the strongest possible Agreement. This entailed inserting a number of key provisions into the negotiating text that were initially proposed by ID, including: a goal to limit warming to 1.5° Celsius and a ‘ratchet’ mechanism requiring countries to improve their emissions reduction targets every five years. As Rolling Stone wrote, “the greatest surprise in Paris was one of the most important players in the negotiations came from one of the world’s smallest nations”.

Working carefully and deliberately over a number of years, ID helped position the Marshall Islands to such a point where they were able to form and then lead the High Ambition Coalition, and where they were increasingly invited into other small deal-making rooms. Crucially, ID’s work extended beyond the technical negotiations, also ensuring the Marshall Islands was able to lead by example in its own efforts to tackle emissions, and garnering international media attention to highlight the plight of the Marshall Islands and reinforce its private calls for greater ambition.

“ID helped us to level the playing field by advising on diplomatic strategy, securing press coverage, and helping us get a seat at the table.”

Photo (top of page): Severe Flooding in Majuro, capital of the Republic of the Marshall Islands. Photo credit: Giff Johnson.