ID advises the democratically-elected government of Somaliland on how to use diplomacy to secure its external policy goals.

Somaliland is a former British protectorate that gained independence in 1960 and was recognized as an independent state. However, acting on the desire at the time of Somalis to live in one state, Somaliland voluntarily joined with Italy’s former Somali colony to form the Republic of Somalia. The union turned out to be disastrous for Somaliland, as the people found themselves marginalized in the new state. In 1969, Siyad Barre overthrew the government of Somalia in a coup and began a policy of calculated repression of the people of Somaliland. When the Somali National Movement stepped up its armed resistance to Barre’s oppressive regime in Somaliland in the late 1980s, Somalia’s armed forces attacked Somaliland, completely destroying its capital Hargeisa, killing an estimated 50,000 people and displacing another 500,000.

In 1991, after the fall of the Barre regime and the total collapse of the Somali Republic, Somaliland resolved to reconstitute itself as an independent State. Since then it has established and sustained peace and stability and held parliamentary and presidential elections. Somalilanders are united in their desire to live in an independent state, something reaffirmed in 2016 when over a million citizens signed a petition calling for international recognition. Government revenue has increased, allowing the introduction of free primary school education for boys and girls. There are more than a dozen universities.

In recent months and years, Somaliland has deepened its relations with other states. In September 2016, Somaliland signed a $442 million deal with UAE-owned company Dubai Ports World over the management of the port of Berbera. Ethiopia has stated that it wants 30% of its trade to flow through Berbera.  At the same time, Somaliland is showing itself to be a responsible partner in an unstable region, both through external security cooperation and internal negotiations to bring under-represented groups in the east into the government.

Since 2006, ID has been working with Somaliland’s democratically-elected government toward improving its diplomatic performance. This entails:

ID has guided Somaliland through changes in the international environment, advising on the diplomatic aspects of efforts to combat piracy as well as on engagement with Somaliland’s neighbors including Somalia.

ID has augmented Somaliland’s credibility as a functioning democratic state by enhancing its engagement with the international diplomatic community. Successful recent efforts have included:

On the public diplomacy front, ID worked throughout 2016 with Somaliland’s Ministry of Foreign Affairs communications staff to promote the 25th anniversary of Somaliland’s declaration of independence. The hashtag #Somalilandis25 generated three million impressions during May’s celebrations.

ID has also cultivated links with civil society, human rights and women’s organizations in Somaliland, with a view to providing greater support in the future. 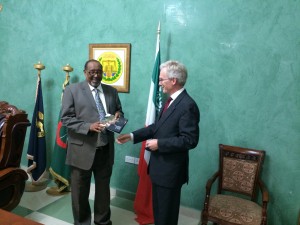 “Independent Diplomat has helped immeasurably to increase Somaliland’s diplomatic reach and boost its international profile as a peaceful democracy in a volatile region. As an unrecognized country, we face significant challenges in engaging with our international partners. ID has helped us to define our diplomatic goals, leverage our de facto sovereignty and get more from our relationships with other countries.”